Observe, if you will,
how winter’s gloomy morning cloud cover
opens up to a warm sun-shiny afternoon.

Patiently light chips away at the block
and despondency gradually
matures into a relief of itself.

The etymology of the the word Heal, as posted in the online etymology dictionary reads as follows:

It’s important to consider that many healing methodologies pit the person against their illness, which enforces duality:

Well, his passing hasn’t really sunk in, but I started thinking about which of his songs would be my favourite, which I couldn’t, but this one has some great symbolism, to do with heroin addiction ( a recurring them in his music).

My own little re-appropriation is to have it refer to the Chinese arts, in particular, Chigong, for example:

“…and when I get excited

It’s taken me a while to get this DIY project to the final stage, because I had to keep buying more marbles. The zip-lock bags are re-purposed, as well as the sponge. The piece of board is just a re-purposed cheapie painting. You could just use a flat piece of custom board or plastic.

You can either just stand on this, or move your feet around, in order to stimulate the pressure points on the soles of the feet. 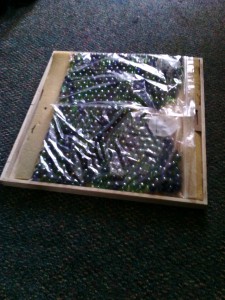 Addressing you
by your true name,
calling to you
from the highest peak
above persistent low cloud
and heavy weather,
is the voice
of Lost Mountain
singing a song of lament
for your absence,
sad for the love
it can no longer share.

So subtle is the melody
that to imbibe it,
your heart becomes an ear,
and your mind becomes an eye,
and your eyes become fingers,
and your hands are therefore left
to be lips,
lost for words,
pressed together,
still and upright,
so as
to at least
humbly mirror
such a quiescent gesture.

I recall my Chigong teacher telling us that, by way of what we in the West call calligraphy, well intended words of healing would be written on fans, and healthy Chi would also be put into the fan, so that whenever the owner uses it, the Chi and information would be transmitted to them. It was taught to us as a legitimate healing technique, but in this poem, words of love have been written on a fan by a woman, and given to her lover, you might say in the “Summer” of their love:

White silk of Chi, newly torn out,
Spotlessly pure as frozen snow,
Cut to make a fan of conjoined happiness,
Round as the moon at its brightest,
It is ever in and out of my master’s sleeve,
And its movement makes a gentle breeze,
But oft I fear with the Autumn’s coming
When cold blasts drive away the torrid heat,
It will be cast aside into a chest,
And love in mid-course will end.

It never once paused
to count the years,
nor measure itself
against its peers,
nor indulge egotistic
thoughts and fears…

the Chinese Maple
in Autumn.

I was born in 1975, and when I was a kid, Star Wars was huge. The other B-movie kind of saga which had a big impact on me in the eighties was the original Karate Kid trilogy. I started doing Seido Karate when I was about eight, and made my way to yellow belt, but I stopped there, because it really wasn’t providing me with that something sacred which I hoped it might.

All of these years later, I think of when I was diagnosed with Sjogrens Syndrome as the chaotic factor in my life which was out of balance in a big way. Then, one day, a friend told me about a Chigong master who was coming to town and doing individual healings. He advised me that Zhineng Chigong was what I needed, and so I committed to learning it. My teacher told me that Chigong was the original martial art, because healing and consciousness precede the need to learn to fight. The blissful feelings it brought about, along with the positive culture, and techniques I could incorporate into my daily life were providing the disciplined sacred space that I needed.

Fear, worry and self-doubt are all part and parcel of being diagnosed with any disease (especially when Western medicine tells you there is no known cure!). Michio Kushi, in his Macrobiotic theory, talks of there being a background and a foreground, and that usually our preoccupation is with the foreground, which is occupied by our fears, vices, and perceived flaws. The background is the positive things which are going on in our lives, often brought about by our efforts to remedy the negative.

So I don’t think my aim is to become a Pollyanna, brimming with positivity  no matter what, but to develop something like dialectic reasoning, as Mr Miyagi does effectively in this scene where Daniel is focusing on the foreground of the Karate tournament (the object of his fear). Mr Miyagi reminds Daniel of the lesson about balance, and shows him the photo of Ali (the object of his love and happiness).

I like to think of the Cobra Kai as being the disease, as its credo seems to be ‘No Mercy”.

That little master is the wise centre in us all.

It occurred to me that the watercolour with salt technique I’ve been developing would look good with well known sacred symbols, since the effect definitely makes me think of what we refer to as the formless void, where limitless Chi awaits to be manifested into form and structure.

The pink lotus was the first one I thought of, since water is indeed symbolic of the void, and the lotus blooms on the surface of the murky water. The blue could be symbolic of the “blues”, or of peace.

Next on the list was the Yin and Yang symbol, otherwise known as Taiji. 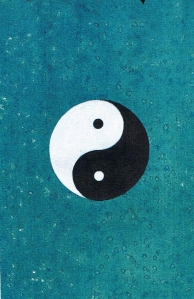 I thought that I pretty much knew what this symbol was all about, but when you do the actual drawing, you learn some interesting things: